Peter Turvey is based in London, England and is a member of the Steam Boat Association of great Britain. He and his wife owned the Winderemere steam launch Merganser in 1990. It is normally kept on river Thames near Walingford, Oxfordshire, England. It was built by Ian Cooper of Windermere in 1981 for the Canal Historian Edward Paget-Tomlinson.

Mr. Peter Turvey also own a Steam Tractor (cheaper than building a big saloon launch, he told me). The 1913 Aveling & Porter Steam Motor Tractor No. 7898 Perhaps the ultimate tow vehicle for a trailable steam launch! A small (about the size of a landrover), light (approx 5 tons) steam road tractor which can be handled by one person. Built in 1913 for Essex County Council and used for hauling roadmaking materials. Sold by them in 1930, and bought for preservation in 1954 by the late Mr Les Smith, who described her restoration in Model Engineer 112, 1955, pps 114-115. (April 1955). 7898 was rebuilt again, with extensive boiler repairs, in 1994, and bought by us from Les Smith in April 1997. She can run at 10-12 miles per hour, and make a 60-70 mile trip in a day. Working pressure is 200psi. Compound cylinders. 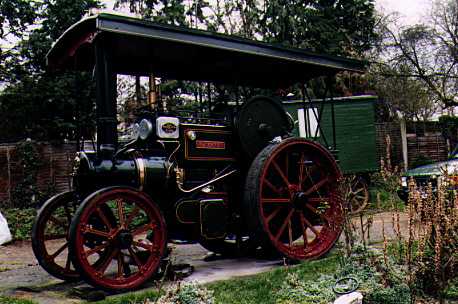 Picture 4
The motion of the steam tractor -
which is usually flying around at 600rpm as the Turvey's thunder along the road! 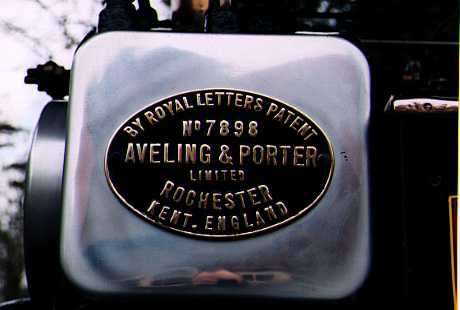 Picture 5
The makers plate (A&P exported engines and steam rollers all over the world).